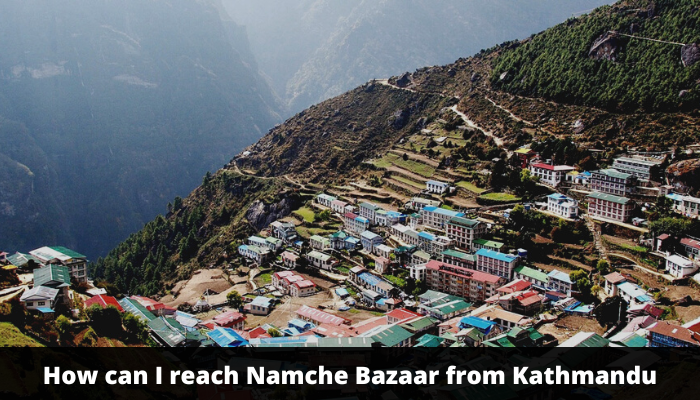 How can I reach Namche Bazaar from Kathmandu

There are numerous hotels, shops, and cafes in the town of Namche bazaar that cater to tourists’ needs. An Irish pub is also present, which is reputed to be the tallest and furthest Irish pub in the entire world. A weekly market is conducted in the village’s center every Saturday morning.

There might also be a daily Tibet market where the main items for sale are typically garments and inexpensive Chinese consumer products. In addition, meals in the mountains are very distinct from those in other regions. It is challenging to import foods that are unavailable in Namche due to the commuting difficulty. Food may therefore be more expensive than in metropolitan areas, and you might not be able to find what you want to eat.

A delicious supper in the mountains is a blessing after a taxing hike, though. In Namche, you may find Dal Bhat Tarkari and other Sherpa delicacies. But you might not have many meal options in locations other than Namche. Yak cheese and butter are quite well-known in Namche Bazaar. In spite of lying in such a high altitude place, Namche has a good electricity supply due to the 600 kW Thame-Namche hydropower plant, which was built close to Thame and inaugurated in October 1995.

Most tourists take a short 30-minute flight from Kathmandu to Lukla airport/ the Tenzing-Hillary Airport. Additionally, the Tenzing-Hillary Airport is known for its narrow, mountainside runway, which has been the scene of numerous mishaps. However, the majority of flights land there and depart without a problem, so there’s really no reason to worry.

Besides, weather-related delays in Kathmandu, Lukla, or while traveling are very common. It is crucial to include a few buffer days in your plan for the Everest region so that, in the event that Lukla flights are temporarily grounded, you won’t risk missing a crucial international connection.

Namche Bazaar is still many hours’ trek distant after arriving in Lukla. Even while the walk may be completed in one long day, spreading it out over two is far more comfortable. Even if you’re in great shape and ready to go, you might not have enough time to hike all the way to Namche depending on what time you land in Lukla following your flight. The route is mostly hilly and mostly follows the Dudh Kosi River.

The second day is the steepest. On the EBC journey, Phakding is frequently where the first night is spent. Trek from Phakding to Namche Bazaar on the second day. The steep trail makes for a strenuous day of walking. The high Hillary Suspension Bridge and your first glimpse of Everest through the trees are just two of the high-stakes rewards, though. To aid in acclimatization, the majority of trekkers spend at least one full day and two nights in Namche.

If you wish to travel to Namche Bazaar via a private vehicle it might take around 7 days for you to reach your destination. It is feasible to take a Jeep from Kathmandu to Jiri or Phaplu which might take you around 1 day. Once you reach Jiri/Phaplu, you can hike to Lukla and then to Namche Bazaar.

The airport in Lukla was created in the 1960s. Before that, the mountaineers used to travel from Jiri on what is known as the “Pioneers’ Route” to reach the Khumbu region. Although it’s less usual these days, the trails are uncrowded, filled with fascinating cultures, and offer stunning views.

At least two days are needed to walk from Phaplu to Lukla. Similarly, it takes five days to reach Lukla from Jiri. From Lukla, it will take around 2 more days to reach Namche Bazaar.

Another option you might find handy is traveling through a helicopter. If you have a reservation on a flight that had been canceled or had a significant delay, helicopters are a convenient backup choice. In an emergency, they could transport you back to Kathmandu because they can fly in conditions that airplanes cannot.

If money is not an issue, taking a helicopter from Kathmandu to the Everest region is a once-in-a-lifetime adventure. You will depart from the Tribhuvan Airport’s domestic terminal in Kathmandu and arrive in Lukla in less than an hour. The majority of sightseeing day trips end in Lukla before continuing on to EBC, with a breakfast stop along the way.

Not all tour itineraries include Namche Bazaar although they might if you specifically request it. This helicopter tour will for sure allow you to experience some of Nepal’s most breathtaking alpine landscapes, and mountains while potentially saving you time and a great deal of physical effort.

1.How much does it cost to travel from Namche Bazaar to Kathmandu?

2.How quickly can you go from Kathmandu to Namche Bazaar?

3.Which airlines offer flights between the airports in Kathmandu and Lukla?

Flights between the airports in Kathmandu and Lukla are only available by Yeti Airlines currently.

4.How are the accommodation services in the Namche bazaar?

There are more than 14 hotels in Namche Bazaar where you can find different kinds of accommodation options.

5.Is Everest visible from Namche Bazaar?

Yes, along the trails from Monjo to Namche Bazaar, Everest can be seen. But Namche Bazaar’s most popular vantage point is the Sagarmatha National Park Museum.

Local foods to eat In Pokhara